Measure your protective antibodies to coronavirus

This easy to use finger prick test can be used to detect previous exposure, and to accurately measure the level of IgG antibodies to the spike protein of SARS-CoV-2 to get a better understanding of your immune response. This test measures the immune response following both vaccination and natural infection. 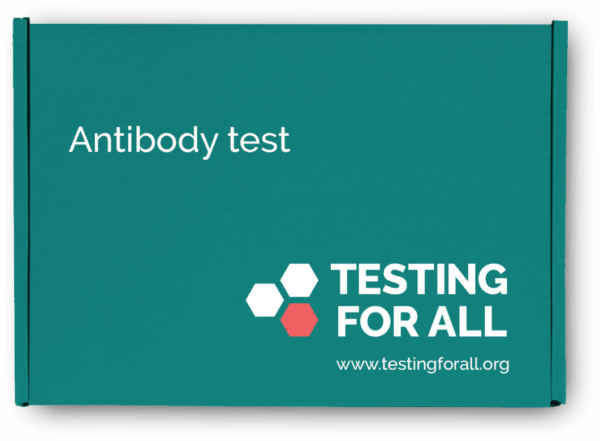 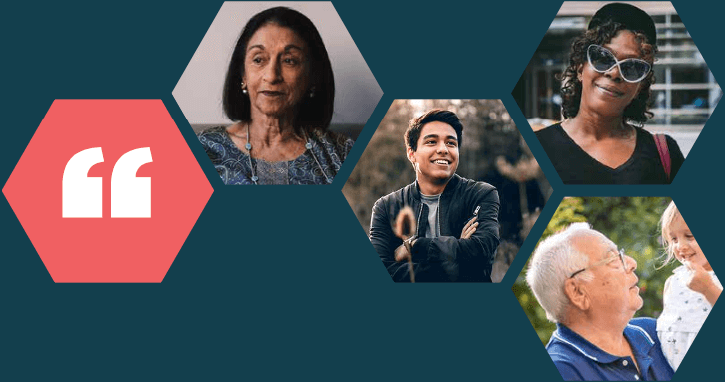 "Easy to collect the sample, easy to post it, results two days later. And excellent customer service!! Thank you, you're doing an amazing job!" 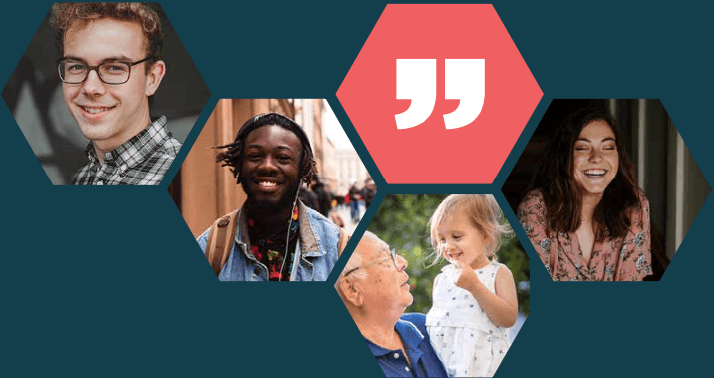 “I could not have had a smoother experience. Ordered a test on a Friday morning. It was dispatched an hour later and arrived on Saturday morning. Took the test on Wed and got my results 48 hours later."

How easy is it to take this test?

This test is easy to use if you have good blood flow at your finger tips. A good way to see if this test is right for you is to watch the instruction video filmed by our esteemed resident clinical advisor, Dr Renee Hoenderkamp.

This test requires 0.5ml of blood, approximately 10-20 drops, collected into a blood tube using a high flow single use safety lancet. We supply 3 lancets in each kit, and on average testers take 2 lancets to get the blood required. About 10% of you will not be able to get the required blood, in which case please ask for a refund by emailing support@testingforall.org quoting your order code sent to you in your purchase confirmation.

If you have low blood pressure or low circulation in your hands, which may present as your fingers going unusually white in cold winter weather, this test may not work for you.

In our usability study we found that 91% of individuals who took the test, were able to get the necessary blood sample, and we will continue to monitor and publish the success rate as we continue to test.

What are antibodies and how long do they last?

Our immune response to COVID-19 infection leads to the production of immunoglobulins, which attach to the virus and activate the rest of the immune system to attack and clear the virus. Immunoglobulin M (IgM) antibodies have been detected as early as day 5 after symptom onset, while the median time for them to appear is day 10‐13. Immunoglobulin G (IgG) antibodies are usually produced at a later stage in the infection at around day 12‐14 days after symptoms, and subsequently remain for a period of time. The Roche Anti-SARS-CoV-2 S test is an antibody test that looks for antibodies to the Spike protein, and provides an antibody level that can be compared to other manufacturers tests.

Various studies have shown that antibodies for SARS-CoV-2 typically last at least 6 months, and that a large cohort of Testing For All users that tested positive for antibodies in October-December 2020, were exposed in March-April 2020.

This excellent study by UK Biobank showed that in most cases antibodies remain for at least 6 months.

“One of the most significant findings of the study is that 99% of participants who had tested positive for previous infection retained antibodies to SARS-CoV-2 for 3 months after being infected, and 88% did so for the full 6 months of the study. This discovery provides an early indication that the antibodies produced following natural infection, and potentially following vaccination, may protect most people against subsequent infection for at least 6 months.”

When should I use this test?

You should use this test if you are looking to find out whether you have developed protective antibodies to the SARS-CoV-2 virus, and if so, in what quantity. It will give you a count of IgG antibodies to the spike protein of the virus, which are developed as a result of vaccination or natural infection.

This test can be of particular interest to individuals who are about to receive vaccination or have received an injection in the weeks prior to testing. By offering a count of antibodies, it allows you to track your immunity over time.

If you are using this test prior to vaccination in order to have a baseline view of immunity, we recommend you order your test well ahead of your vaccine appointment to allow for any delays in Royal Mail deliveries.

Will this test detect antibodies created by a vaccine?

Yes, this test will detect antibodies created by a vaccine. Currently, the majority of vaccines (Astrazeneca/Oxford, Pfizer/BioNtech, Moderna) aim to induce an antibody response against the spike protein, which can be measured by using this test.

We recommend to wait until 21 days post vaccination to perform this test.

If you are looking for a simple yes/no answer to whether or not you have previously been exposed to the virus, you can use our affordable Home Total Antibody Test

How should I interpret the results from this test?

A  positive result means that you have developed protective IgG antibodies to the spike protein of the SARS-CoV-2 virus. Our report will also provide you with a numeric count of these antibodies which is standardised and allows you to compare with other available tests and published WHO standards. This test will detect antibodies amongst individuals who have been naturally infected but also received one of the following vaccines: AstraZeneca, Pfizer / BioNtech, Moderna.

If antibodies are detected, it means that the immune system will recognise the SARS-CoV-2 virus if met in the future and this will prevent serious reinfections from occurring. There is no way of predicting the level of that protection.

A negative result tells you that you likely have not been exposed to SARS-CoV-2 or that the level of protective antibodies have subsequently decreased to a point where they can no longer be detected.

Should I use this test if I take immunosuppressant medicine / am immunocompromised?

Patients on immunosuppressant drugs or with compromised immune systems as a result of underlying health conditions are unlikely to mount as robust an immune response as patients with intact immune systems. This may result in lower levels of antibodies detected, even in the wake of vaccination. Despite a suboptimal antibody response, vaccination will still afford a certain amount of protection against catching COVID-19

For immunocompromised patients, we currently recommend testing 6 weeks after vaccination. Our clinical team continues to monitor the situation closely and we will update with most up to date advice.

What does CE marking mean?

What if my sample gets voided at the lab?

On a few rare occasions, samples do get voided by the lab, meaning we cannot return a valid result. There are a few reasons why this could happen but it does not mean you did anything wrong in taking your sample. The usual reasons for a rejected sample are:

If you would like, we can issue you with another kit to try again or alternatively offer you a refund of £20.

What if I cannot obtain sufficient blood for my sample?

In our study carried out in August 2020 we found that approximately 91% of users were able to take a blood sample suitable for this test. If you have low blood pressure or low blood circulation at your finger-tips it may not be easy for you to get the sample that you need. This is normal for many people, so don’t worry. If you would like, we can issue you with another kit to try again or alternatively offer you a refund of £20

How long do I have to use my test kit?

You have two months from date of purchase to use your test kit, after which our lab partner will no longer process your sample. The sampling kit is sent with a sticker on the outside of the packaging reinforcing this important point.

The kits need to have a use by date as it is not possible to guarantee that a particular test can be processed more than 2 months into the future.

Where will the test be carried out?

You will take your own blood sample in the comfort of your own home, and the test will be processed by our partner lab, which is a UKAS certified laboratory.

Can I do this test if I’ve never had symptoms?

Yes, you can still do this test. Research shows that up to 30% of people who have had COVID-19 have not experienced symptoms

Is this test legal?

Yes. On the 8th June 2020 the Medicines and Healthcare products Regulatory Agency (MHRA) issued a statement warning that home antibody testing using capillary blood may not be reliable. To fully comply with the MHRA issued guidelines this new test was developed which uses:

What happens to my personal data including my blood sample?

Privacy is everything to Testing For All. To understand our stance please refer to our privacy notice.

As of 15th September 2020 our laboratory partners are requested to retain “positive” antibody test samples. Your sample may be retained, though it is not identifiable to you without requesting further information from Testing For All. In the unlikely event that we are required for legal or regulatory reasons to reveal this information, we will challenge this action and notify you of the request for information.

If you are offered this test by your employer, then your result will be shared in accordance with the Employee Privacy Notice.

How accurate is this test?

This test uses the Roche Anti-SARS-CoV-2 S Immunoassay which has an overall manufacturer stated sensitivity of 98.8% from 1,610 samples (rising to 100% at 28 days post infection) and an overall clinical specificity of 99.98% from 5,991 samples.

Testing For All believes in sharing the full manufacturer accuracy claim and any independent accuracy evaluation that is available, rather than sharing the best data. Please beware of testing organisations that promote 100% sensitivity or specificity as this is an unlikely claim in the real world.

How do I get in touch with Testing For All if I have any questions?

For anything else, you can contact us by filling out this form.

Will the test result be impacted if I take biotin supplementation?

Every Roche Immunoassay uses a biotin – streptavidin reaction. However, Biotin in the blood has to be at extremely high levels to cause any interference.